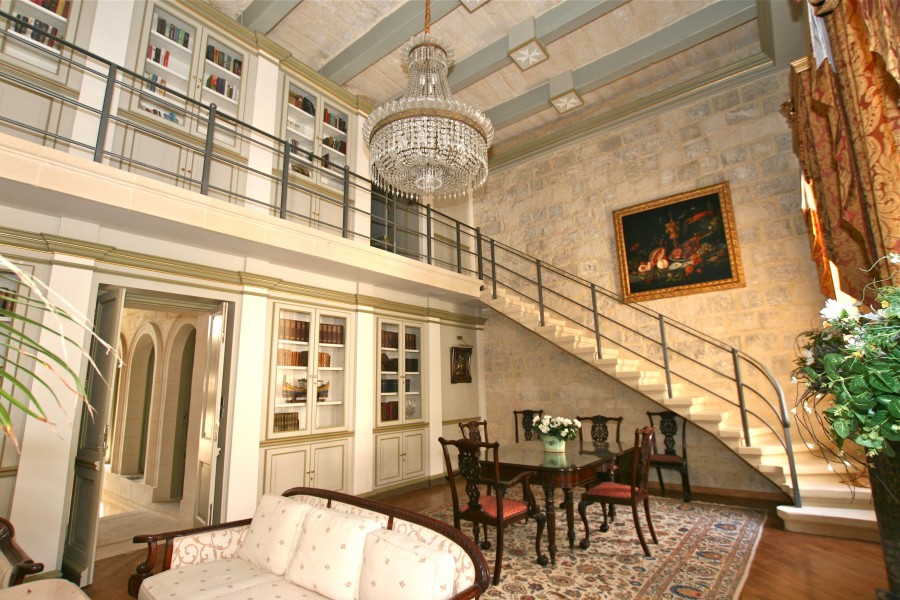 Located in the most exclusive area of Valletta, this palazzo can be considered of historical importance as it retains an extremely precious architectural quality. Its sober facade can easily go unnoticed but once you step inside it is quickly evident that this 17th century property is rich in its noble past and exquisitely renovated, giving a sense of elegance and luxury.

Practically intact, the palazzo, which originally served as a casa bottega, is reminiscent of the Mannerist and early Baroque style. Its renovation, conducted by expert architects, preserved its original character whilst incorporating modern amenities. The project was indeed excellently executed and was awarded the Architecture Prize of the 2013 Malta International Arts Biennale.

The palazzo features typical Maltese flagstone flooring, fitted timber furniture and an ensemble of décor that contribute to its sense of sophistication. Glittering chandeliers and mirrors, reminiscent of the Louis XIV style, embellish the walls of the bedrooms, which are given a warmer touch thanks to the timber flooring. The attention to detail follows in the bathrooms where the walls are adorned with Moroccan Tadelakt, as used in hammams and bathrooms in Morocco, whereas the floors are made of various kinds of marble.

Another unique feature of this palazzo is its roof garden that boosts spectacular open views of our Grand Harbour and the majestic three cities.

The romantic and historic ambience of this palazzo has also attracted the interest of filmmakers. Palazzo Prince D’Orange has been used as one of the many locations in Malta for the Steven Spielberg’s 2005 production Munich, starring celebrities Daniel Craig and Eric Bana.

This gem of a property, exclusively represented by Malta Sotheby’s International Realty, is currently for sale at the Guide Price of €4,950,000. One can view this property on maltasir.com under MLS ID. 106228. Contact Malta SIR for more information on info@maltasir.com or on +356 9910 8070.